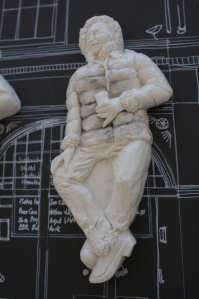 The British culture of drinking was the first thing I noticed which differed from the environment in which I grew up. There was even a bar inside the college and there were three pubs within five minutes distance from my flat. I was really surprised when I saw people drinking beer during the day while enjoying a meal in the pub. Having investigated the history of British drinking culture from my case studies, I understand the culture more. But still, I don’t like the smell of beer and hate drunk people saying ‘arigato’ or ‘nihao’ to me.