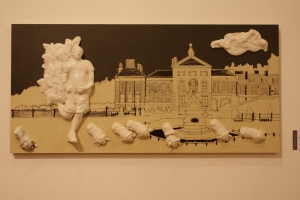 My desk in the Royal College of Art has a big window. Through this window, I can see a part of Hyde Park where I see runners every twenty seconds. It did not matter if it was raining or snowing, early in the morning or late at night. I was amazed. Sometimes I would see a man running with a baby in a pram or a couple running with their dogs. I became curious about the jogging culture and when the British started jogging outside in the park or in the streets. This is really rare in Korea as jogging is not very popular nor is there a lot of places to run outside. Koreans are more keen fast-walkers rather joggers. By the way, I don’t believe walking is not exercising. It is daily human activity.